This article* explains my case against Eni 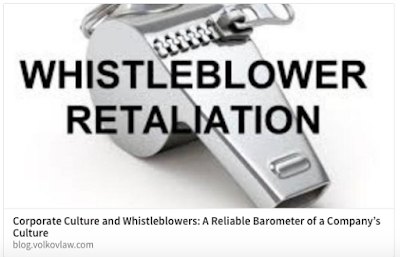 Barclay Bank’s CEO was disciplined and suffered financial penalties for his improper attempts  to identify a whistleblower who sent an anonymous complaint to the Barclay’s Board.

Wells Fargo is alleged to have fired several managers and employees after they raised specific concerns about the sales incentive program.

You have to ask yourself – what the heck are these companies doing?

In the Barclay’s case, the CEO enlisted the bank’s security office to identify the anonymous whistleblower who sent two letters to Barclay’s board alleging prior misconduct by a close colleague of the CEO who had worked with the CEO at his former bank.  The CEO explained in his subsequent apology:

In my desire to protect our colleague, however, I got too personally involved in this matter. My hope was that if we found out who was sending these letters we could try and get them to stop the harassment of a person who did not deserve that treatment. Nevertheless, I realise that I should simply have the compliance function handle this matter, as they were doing. This was a mistake on my part and I apologise for it.

The challenge for companies like Barclays and Wells Fargo is how to start rebuilding a culture of trust where employees feel comfortable raising concerns without fear of retaliation. Without a real commitment to encouraging employee concerns, most employees are suspicious and reluctant to raise concerns.  It is a difficult to overcome employee reluctance.

The challenge for companies like Barclays and Wells Fargo is even more daunting when employees who raised concerns are terminated or investigated by the CEO.

In the case of Wells Fargo, the Department of Labor is investigating the company for whistleblower violations of Dodd-Frank and Sarbanes-Oxley.  In one case, a Wells Fargo manager was fired within 20 days of raising a complaint. The reason for the firing cited by the bank was a previously discredited complaint about a manager’s alleged drinking behavior.

A speak up culture requires the commitment of the board, the CEO and senior executive management. Concrete actions have to be taken to establish credibility for an employee communications program.

Barclays has a real credibility program – the offending CEO cannot turn around and tell employees that he wants to hear their concerns. As he demonstrated, he is more interested in the identity of the whistleblower than responding to the substance of the concern.

Similarly, Wells Fargo’s firing of employees who complained about the abusive sales incentive program creates a manifest culture of distrust. To repair such a culture will take time, commitment, and specific actions by leadership, mid-level managers and staff. Until such remediation occurs, Wells Fargo will continue to suffer from a culture where employees are reluctant to raise specific concerns.

Actions always speak louder than words and companies who have suffered serious retaliation issues can only restore trust with meaningful actions and specific commitments.