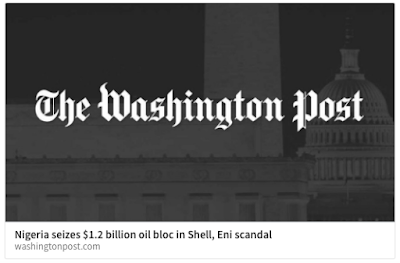 The main newspapers in the world are reporting the new scandal involving a millionaire bribe payment in Nigeria (OPL 245) made by the Italian oil giant Eni.

The exception are the great Italian newspapers that keep quiet so they don't lose their advertising funds.

The beginning of the end... 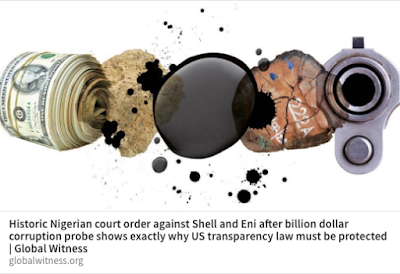 It has been reported in Nigeria that the country’s Economic Financial Crimes Commission (EFFC) has secured a court order mandating the return of oil block OPL 245, following an investigation into corruption allegations over how the deal was done. Shell and Eni paid $1.1 billion to a company secretly owned by a former Nigerian oil minister in 2011, depriving its people of badly needed funds.

The news shows exactly why a landmark transparency rule now under threat from Republican lawmakers in the US is so important. The Cardin-Lugar anti-corruption provision requires companies to disclose what they pay foreign governments for natural resources. After long delays in finalizing the rule due to oil industry opposition, the final rule was issued in June 2016. Had it been in place in 2011, this crooked deal would never have gone through.The rule is now under threat as Republicans plan to introduce a resolution to void this important provision

“This is historic. Generations of Nigerians have been robbed of life-saving services while oil men have grown rich at their expense. With US Republicans supporting the corrupt by slashing landmark laws and appointing an oil executive as their most important diplomat, it is inspiring to see Nigeria fight back.  Now that Shell and Eni are finally facing consequences, companies and their investors must understand they can no longer do backdoor deals with corrupt officials without paying a hefty price”, said Simon Taylor of Global Witness.

Nick Hildyard of The Corner House said, “We applaud the Nigerian Government for fighting back against corruption without fear or favour. Authorities in the US, UK, Italy and the Netherlands need to continue to do their bit in holding all parties responsible to account".

Antonio Tricario of Re:Common said, “As the largest shareholder in Eni, the Italian Government has a responsibility to intervene. It must take action over Eni’s mismanagement and alleged corruption”.

For me, this is the beginning of the end of the Italian oil giant Eni... Time will tell! 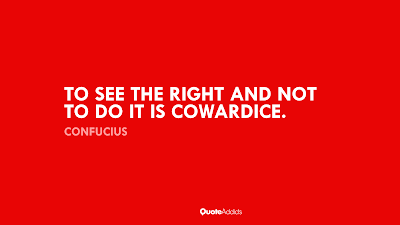 Eni's Board pretends nothing happens in the case involving the 15 years story fight of a whistleblower against the Italian oil giant.

Observation: Get to know is this LINK my story.against Eni.

Do you know how a company silences and intimidates the press? 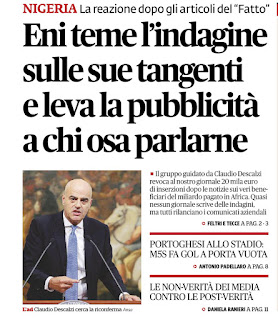 Do you know how a company silences and intimidates the press? It invests millions of dollars in newspapers that not report illicit and unethical acts... And cut advertising money of those newspapers that dare to report unlawfulness, even if it is the case of a millionaire bribe payment made by the CEO of the company that is also the target of a lawsuit for "international corruption" (OPL 245).

What is the purpose of the IIA Global's Code of Ethics? 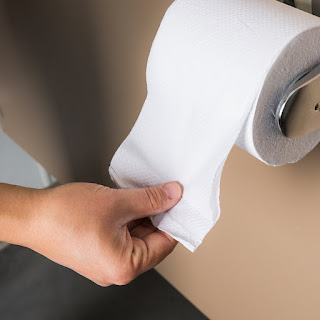 After filling a complaint against Mr. Marco Petracchini (Senior Vice President of Internal Audit in the Italian oil giant Eni and member of the IIA Italy Executive Committee) with more than 50 corroborative documents, and take notice of the filing of this complaint by the IIA Global Ethics Committee, it is clear that this institution "defends"and "protects" its "associates" around the world. And there is more! The IIA Global's Code of Ethics serve no purpose nor can it be used as "toilet paper", just like Eni’s Code of Ethics.

Get to know this COMPLAINT and draw your own conclusions. 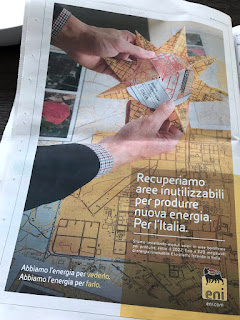 What happens when companies are publicly recognized as destroyers of the environment?

It's simple! The companies invest millions of dollars in marketing!

The Italian oil giant Eni is the "Queen of Marketing"... This is Eni's Way!

How is it possible?

How is it possible that the Italian oil giant Eni - a corrupted and unethical company - receives an award as a sustainable company?

Eni is a "Queen of Marketing"! 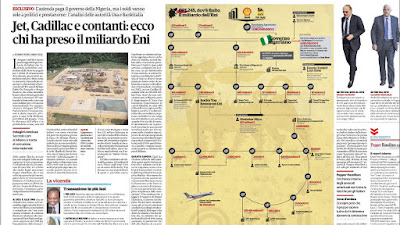 The newspaper report is based on the complaint of the Italian Public Ministry that incriminates the current CEO, Mr. Claudio Descalzi, and his predecessor, Mr. Paolo Scaroni, for "international corruption" in the case known as "OPL 245" that involves the payment of a billionaire bribery in Nigeria. 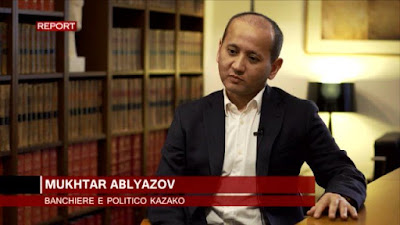 The Italian oil giant Eni involved in one more scandal. Mr. Mukhta Ablyazov, a banker and politic from Kazakhstan, acuses the Italian government, the Ministry of Foreign Affairs and Eni for being responsible for the "kidnapping" of his wife anddaughter.

Read this interview in English or watch the video in Italian.


For you, is the "whistleblower" a hero, a villain or simply a fool? Watch this video and make up your mind! For me, doing the right thing... Acting ethically and with integrity... Makes our life worth living!

Observation: Get to know is this LINK my 15 years fight story agains the Italian giant oil Eni.
Posted by Eni's Way at 8:31 AM No comments: