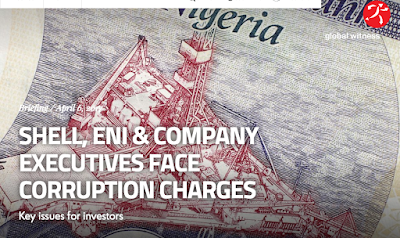 On 20th April 2017, Shell, Eni, and several Eni senior executives including the current CEO Claudio Descalzi, will face a preliminary court hearing in Italy where the Milan prosecutor is seeking that they be tried for alleged international corruption offences over the 2011 purchase of the Nigerian OPL 245 oil block. Charges have also reportedly been filed in recent weeks against both companies by Nigerian authorities in relation to the same deal.

Global Witness has published a new briefing for investors. This briefing outlines the recent legal developments in Italy and provides background on the OPL 245 deal which has led to the Italian charges, as well as ongoing investigations in Nigeria and the Netherlands.

As well as raising specific issues for Eni and Shell, this matter highlights the risks to companies and shareholders more broadly from a lack of transparency around company payments to governments and the ultimate beneficial ownership of companies, as well as the need for more robust corporate anti-corruption policies and practices.

The briefing identifies the following key issues for investors:

- potential loss of oil block key to Shell's and Eni's future reserves;
- potential convictions for corruption;
- inadequate anti-bribery & corruption policies & board oversight;
- and repeal of anti-corruption regulations at the request of extractive industries.

The briefing also suggests questions investors can ask Shell and Eni to assess the companies' handling of this issue and of their anti-bribery and corruption policies and practices.