Eni: What you sow today you will reap tomorrow! 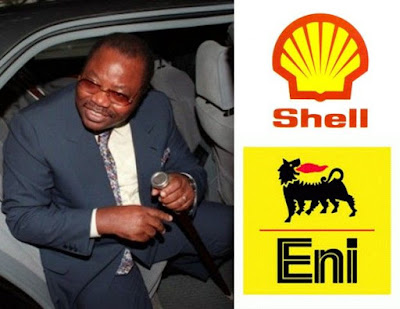 The Nigerian government is set to retrieve one of Africa’s richest oil blocs from oil giants, Shell and Eni, PREMIUM TIMES has learnt.
Not only will the two oil giants lose OPL 245, should President Muhammadu Buhari approve the recommendations, they will also be fined billions of dollars for illegal activities, including paying money to fraudulent public officials and private citizens in order to secure the bloc.
The retrieval of the controversial oil bloc, estimated to contain about 9 billion barrels of crude, as well as placing heavy fines on the oil giants, is contained in a far-reaching recommendation by the office of the Director of Public Prosecution, DPP, Mohammed Diri.
The recommendation was at the instance of the Attorney General of the Federation and Minister of Justice, Abubakar Malami, who is set to advise the federal government on how to proceed on a controversial deal that is being investigated by authorities in four different countries.
In arriving at its recommendations, the DPP committee, which included lawyers from his office, called for the cancellation of the ‘settlement agreement’ that ceded the oil bloc to Shell and Eni.
Summary of OPL 245 history. Source: Global Witness
The ‘Settlement Agreement’
Made on April 29, 2011, the settlement deal is made up of three different ‘Resolution agreement’ signed by the parties involved in the OPL 245 saga.
The first, titled “BLOCK 245 MALABU RESOLUTION AGREEMENT” was signed between representatives of the federal government and those of Malabu, which was represented during the discussions by a former petroleum minister, Dan Etete.
The second agreement, titled “BLOCK 245 RESOLUTION AGREEMENT” was between the Nigerian government and officials of Shell and Eni/AGIP; while the third agreement, titled “BLOCK 245 SNUD RESOLUTION AGREEMENT”, was signed by officials of the Nigerian government and Shell.
The immediate past attorney general of the federation, Mohammed Adoke, and immediate past petroleum minister, Diezani Alison-Madueke signed all the agreements on behalf of the federal government. Both are among officials being investigated by Nigeria’s foremost anti-graft agency, the Economic and Financial Crimes Commission, for their roles in the scam.
The agreements saw the transfer of OPL 245, first from the Malabu to the Nigerian government and then from the government to Shell and Eni. The agreements also effectively cancelled all previous law suits and judgements related to the case.
It was based on these agreements that Shell and Eni paid a total of $1.3 billion into Nigerian government accounts, which as stated in earlier reports by PREMIUM TIMES, largely ended up in accounts of phoney companies and shady characters.
Cancel the agreement
The committee empanelled by the Attorney General Malami recommended that the agreement be cancelled, describing it as “null and void”, and saying it “should not be given any legal effect by the FGN (Federal Government of Nigeria) as doing so would amount to the FGN condoning and perpetuating illegality.”
One of the reasons the panel consider the agreement illegal is that the ex-convict, Mr. Etete, had no legal authority to negotiate the agreement on behalf of Malabu as he was not a shareholder of the company nor had the permission of the shareholders to do so.
Also, the oil bloc was awarded to Malabu in furtherance of Nigeria’s policy to encourage local companies and part of the conditions for the award was that “foreign participation interest in the blocks (OPL 245 and 214) shall not exceed 40%, i.e. 60/40 indigenous to foreign;” a fact Shell was aware of but chose to ignore.
The committee also sought the cancellation of the agreement based on a resolution by the last House of Representatives, which called for the cancellation and demanded that Shell be“censured or reprimanded… for its lack of transparency and full disclosure in its bid to acquire OPL 245.”
Also, although Shell and Eni claimed they only struck an agreement with the federal government and that they did not know, before the agreement, that the money they paid was going to Malabu, evidence by investigators in Italy and the Nigerian anti-graft agency, EFCC, shows that the oil firms knew the payment was eventually going to Malabu accounts controlled by Mr. Etete, a man once convicted for money laundering in France.
Apart from calling for the cancellation of the agreement, the DPP panel also recommended the full recovery of the money paid by Shell and Eni, describing it as “proceed of crime.”
PREMIUM TIMES had reported how the Federal Government paid over $800 million of the money into accounts controlled by Mr. Etete and how Justice Edis of the Southwark Crown Court in England refused to release $85 million of the remaining sum to Mr. Etete in December.

In refusing the to release the money, the judge questioned the actions of the Goodluck Jonathan presidency on the OPL 245 saga saying “I cannot simply assume that the FGN which was in power in 2011 and subsequently until 2015 rigorously defended the public interest of the people of Nigeria in all respects.”
Apart from recommending the withdrawal of the OPL 245 from Shell and Eni and calling for the retrieval of the money, the panel also asked the federal government to collaborate with all foreign agencies investigating the deal as well as prosecute all individuals and firms that violated local and international laws in the process.
In its recommendation, the panel also stated that the Federal Government can make “close to $10 billion” from the scandal.
Making money for Nigeria
To make the money, the panel recommended that Shell and Eni be fined at least $6.5 billion (five times the $1.3 billion Shell and Eni originally paid in 2011 the block).
This, the panel stated, should be done “in accordance with the relevant provisions of our laws in conformity with international best practices via the appropriate courts (at) home or abroad as the case may be.”
In other words, from the fine and the amount to be retrieved of the $1.3 billion, the government could make about $8 billion.
Also, in asking that the oil bloc be returned to Malabu’s original owners, the panel asked that the necessary licensing fees, transfer fees, signature bonus, and tax be paid by the firm; while 50 per cent of the rights to the bloc should return to Nigeria after three years based on original intent of awarding the bloc.
PREMIUM TIMES had reported how Malabu was awarded the oil block in 1998 with its shareholders being Mohammed Abacha, son of late military dictator, Sani Abacha, (50 per cent); Kweku Amafegha (the fictional character created by Mr. Etete, 30 per cent); and Wabi Hassan (wife of Hassan Adamu, former Nigerian ambassador to the U.S. 20%).
Human rights lawyer, Jiti Ogunye, had argued that the oil bloc ought to return to Nigeria and Malabu’s registration cancelled since it was based on falsehood.
“Section 190 and Section 436 (b) of the Criminal Code Act is applicable to the conduct of the promoter of Malabu, in that a false representation or declaration was made to induce the Corporate Affairs Commission to issue an incorporation certificate,” Mr. Ogunye said.
“Owing to the false representation, the Corporate Affairs Commission can approach the Federal High Court under Section 563 of CAMA to seek the withdrawal and cancellation of the Certificate of Incorporation of Malabu.”
Awaiting Malami, Buhari
The DPP report was to be sent to the Attorney General last week, a source at his office told PREMIUM TIMES, but was delayed due to Mr. Malami’s trip with President Muhammadu Buhari to the United Arab Emirates.
The report is to be sent this week to both the Solicitor General of the Federation, Taiwo Abidogun, and Mr. Malami, with the latter expected to advise President Buhari on the next steps based on the recommendations.
A source at the presidency told PREMIUM TIMES that the president was keenly following the matter and recently received a report on it from the office of the Vice President, who is coordinating the actions of the AGF, EFCC and Petroleum ministry on the matter.
Both the DPP and the Attorney General, in separate phone interviews, confirmed their offices were working on resolving the OPL 245 issue, but would not comment on the details.
“Malabu is a very sensitive issue and if there’s any resolution, I will have to get clearance before I can speak to the press on it,” the DPP, Mr. Diri, said.
Also, PREMIUM TIMES learnt that Shell was already aware of the government’s moves to cancel the agreement, and was lobbying against it.
However, the oil giant’s spokesperson, Precious Okolobo, declined comments on the matter.

Note: by Premium Time (Idris Akinbajo and Joshua Olufemi)
Posted by Eni's Way at 5:51 AM No comments: 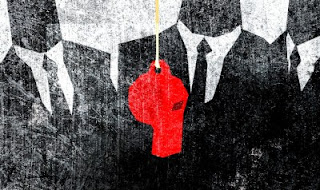 We want to make a research on Whistleblowers of the corporate world. With this study, we can work on creating protection mechanisms to those who were motivated and encouraged by a Code of Ethics to report nonconformities with the word and spirit of this important instrument in the lives of thousands of companies around the world.
1. Have you ever suffered retaliation for making a complaint?
2. Do you know someone who has suffered retaliation for making a complaint?
3. What was the kind of retaliation? A functional demotion? Persecution of colleagues and superiors? A dismissal?
4. Send us another informations or suggestions.
Thank you so much for your participation, stating that the data will be treated with absolutely confidentiality.
Answer the research on the following email:whistleblowers@institutebusinessethics.org.br.
Posted by Eni's Way at 10:21 AM No comments:

I'm making my life worth living! 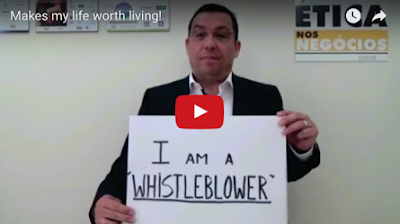 For you, is the "whistleblower" a hero, a villain or a fool? Watch my video and make up your mind! (See the video on this LINK).

For me, doing the right thing... Acting ethically and with integrity... Makes our life worth living!

Observation: Get to know is this LINK my 15 years fight story agains the Italian giant oil Eni.
Posted by Eni's Way at 8:55 AM No comments: