Every year the “whistleblower” gains more importance in the context of corporate reputatuion and business continuity. The expression doesn’t bring anymore something pejorative and the complaint is no longer labeled as a “stool pigeon”. Now the whistleblower has a more noble, laudable and exemplary function: to preserve the name, image, reputation and patrimony of the companies! On the other hand, all of the Stakeholders should pay more attention on the retaliations against those who were motivated by the companies, encouraged and protected by the Code of Ethics to present some kind of concern or even complaint.

Paradoxally, it must not be allowed to the companies to kill their own whistleblower! It is not today that the companies kill the whistleblowers. The most famous cases – which including have been a cover of the renowned US magazine "Time" in the special issue "Persons of the Year" - are the WorldCom (Ms. Cynthia Cooper), FBI (Ms. Coleen Rowley) and Enron (Ms. Sherron Watkins)

This was the case of Douglas Linares Flinto, founder and CEO of the Brazilian Business Ethics Institute and for fourteen long years, he tries, relentless and relentlessly, to rescue and restore his name, his honor, his image and his reputation, which was unjustly depreciated.

But no! After killing the whistleblower in Brazil, Eni tries to kill the whistleblower in Italy through a “Frivolous Lawsuit” demanding the courts of Rome a compensation of $ 40 million for slander and for libel. Not only that, company destroyed the working lives and the retirement of the Mr. Flinto.

Require from the Eni's Board of Directors comply with the words and spirit of its own Code of Ethics and so rescue and restore the name, image, reputation and honor of Mr. Flinto it is the “right and ethical thing” to do. 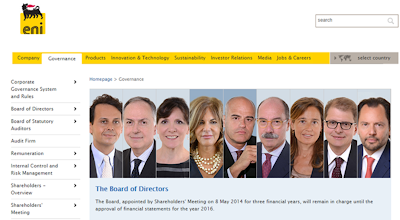 The struggle of Mr. Flinto against this giant Italian company with global operations can serve as inspiration and motivation for thousands of people worldwide. Besides, this case will be an example for those companies who hide in the drawers their Code of Ethics and only make use of it when they are interested. Companies like that use Ethics only as a “marketing tool”, but fortunately, the market and the Stakeholders will be ruthless and will shut the doors to companies who shows unethical business practices.

Ethics is always worth it!

Sign the petition CHANGE.org
Posted by Eni's Way at 3:14 PM