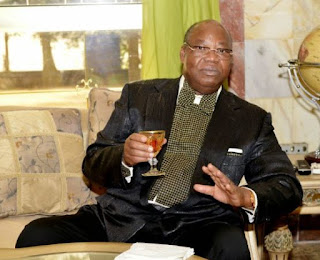 When the corrupt (the Nigerian government) protects the corrupter (the Italian giant Eni).

The United Kingdom is waiting for Nigeria to claim an $85million loot recovered from a former petroleum minister, Dan Etete, according to the Evening Standard of London.
The newspaper reported that federal government’s failure to send a proceeds-of-crime submission to the judge of a UK court is stalling the recovery of the money which is frozen in a NatWest bank account in London.
Federal government officials could not be reached last night for their reaction.
The situation has left the funds ‘frozen’ and the court case ‘languishing’, the newspaper said.
The $85m is believed to be part of the proceeds from the award of the licence of OPL 245 – an oilfield containing an estimated nine billion barrels of crude – made by Etete to Malabu Oil & Gas,  for $20 million, said to be  a tiny fraction of its real value.
The licence award sparked a multitude of legal suits between Shell and Malabu over the ownership of the field only for the federal government to sell the field to Eni and Shell. $1.09 billion of the money paid by the two companies later found its way to Malabu.
Shell and Eni claimed ignorance of who paid the $1.09 billion to Malabu.
The newspaper said investigators at Britain’s National Crime Agency who are trying to probe the alleged laundering of OPL 245 money through London banks and properties are frustrated by alleged inaction from Nigeria’s end.
“Last week, the two governments agreed criminal assets stolen in Nigeria and seized in Britain can be returned to the West African country, but such breakthroughs are rare,” it said.
“Buhari’s governing style is also a source of frustration. Critics say he is slow in his decision-making, which allows the EFCC to wallow in indecision.
“Buhari’s critics say his approach means that much-needed funds from corruption cases are not bringing in revenue for an ailing economy ravaged by low oil prices, and the oil blocks themselves are not being developed.”

The Malabu Oil deal is believed to have  led to the siphoning off of $1 billion from a $1.3 billion international investment in the lucrative oil block through ‘fees’ to Etete’s company and middlemen.
Justice Edis said: “Given the large sums of money involved that are effectively paid to a former minister to a bank account in the Middle East, the whole exercise is backed by murky instructions.”

Note: This text is the Today newspaper (Nigeria)