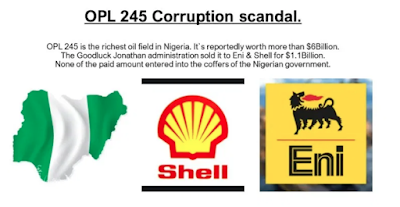 In 2011, Eni and Shell paid $1.1 billion in a murky deal for #OPL245. Global Witness tracked down documents showing that this money didn’t go to benefit the Nigerian people.

Instead, it went to convicted money launderer, some politicians, government officials and former oil Minister, Dan Etete, who had awarded himself ownership of the block in 1998 via a company he secretly owned, Malabu Oil and Gas.

After six years of denying any wrongdoing, Global Witness’ investigation forced Shell to admit it knew the money would be diverted into private hands, and went ahead with the deal anyway.

Read more in this LINK.