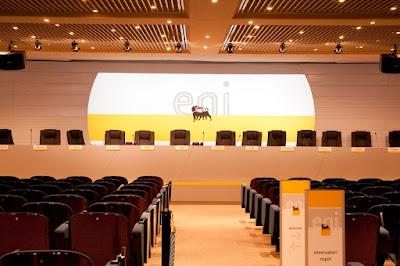 However, the members of the Board of Directors of the company did not answer to the questions that were individually formulated to them and preferred to respond in a long text. In this text, once again Eni "made up" a new version on my dismissal:

"The former employee was fired together with other actors of unlawful behavior, by reticence, for having violated the obligation of confidentiality and by trying to use instrumentally Eni's Code of Ethics to gain personal advantages of the company".

This was the third version about my dismissal without Eni having submitted one single proof on its charges. In fact, Eni tried to prove what the company said. In this same document Eni also says:

“Contrary to his belief, from the investigations performed by Eni, following the notices received in 2002, it emerged that, as reported by the Board of Statutory Auditors of Eni SpA in the Shareholders’ Meeting Report included in the Eni 2002 Financial Statements”.

It is easy to see that in 16 years Eni presented three different versions on my dismissal, distorting, at each new version, the facts that originally motivated the complaints lodged by me. It is also unincontrovertible fact that one version was more false and liar, more harmful and damaging than the other.

In the 1st Version, the company denies the "complaints" made by me and denies the "retaliation" practiced by Eni's Brazilian subsidiary, claiming that it was only a simple and ordinary "administrative and organizational restructuring". In the 2nd Version, I "did not collaborate" and had a "reticent stance" when Eni carried out "secret investigations" in Brazil. And, surprisingly, in the 3rd Version, the company says that I was criminally involved in the scheme of internal fraud and corruption (which I denounced), and that my dismissal occurred along with other actors of "illegal behavior". In addition, Eni accused me of "reticence", of not having preserved "confidentiality" and of being an "opportunistic" person because I had used Eni's Code of Ethics (which I fulfilled in full) to build an untrue story with the intention of obtaining financial advantages of Eni. The company cunning returns against the company itself, as it is more than evident that Eni doesn’t want to admit the truth: that I was dismissed in "reprisal" after denouncing a million-dollar scheme of corruption in Eni Brazil.

It is to be noted that in all those years Eni doesn’t admit its mistakes towards me. It is undisputed that I: (a) simply complied with the determinations of Eni’s Code of Ethics; (b) that I was the "whistleblower" who stripped away the dark facts that were happening in the innards of Eni Brazil; (c) that I denounced a millionaire fraud and corruption scheme at Eni's Brazilian subsidiary, providing the company with the necessary measures to correct such non-conformities with the Code of Ethics and to stop the millionaire deviations in the coffers of Eni Brazil; (d), nor did it finally admit that I was dismissed in "reprisal" when he should have been protected by the instruments present in Eni's Code of Ethics.

Now, I decided to buy shares of Eni to become a "shareholder" of the company. And, in May 10, 2018, I will be present at Eni's Shareholders' Meeting to - in person - try to undo the all the slanderous and mendacious, cruel and damaging, libelous and defamatory comments made by the Board of Eni. This way, I can - finally - be able to rescue and restore my name, my honor and my reputation unfairly depreciated and denegrated by the Italian oil giant over more than 16 years.