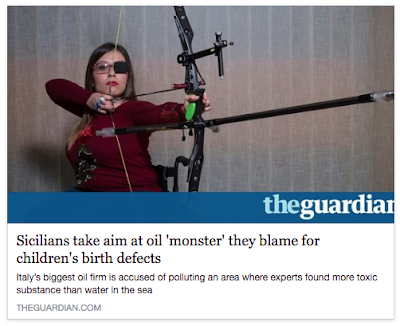 Italy’s biggest oil firm is accused of polluting an area where experts found more toxic substance than water in the sea.

Everyone in the Sicilian town of Gela knows someone who has been hit by the health crisis that has gripped the town for decades.

Mortality rates are higher than elsewhere on the island, and the town has an unusually high rate of birth defects, including the highest rate in the world of a rare urethra disorder.

“There were tragedies that happened daily in the city,” said Luigi Fontanella, an Italian lawyer who began gathering testimony on the health of Gela’s 70,000 residents in 2007. “Everyone in Gela had a relative, a friend and often a child suffering from serious ailments.”

Fontanella found that hundreds of children had been born with congenital anomalies including hypospadias – the urethra disorder – cleft palates and spina bifida.

Local people have long blamed pollution. A 2011 study by the Italian health service drew a similar conclusion: dozens of babies were dying in the womb or within a week of being born every year from complications caused by environmental contamination.

Now, 10 years into a battle to assign criminal responsibility for the town’s health problems, the Italians living in this wasteland feel like they may be a step closer to justice.

The prosecutors said Eni for years had been illegally hiding tonnes of toxic waste in a three-mile-long undersea dump off Sicily.

If convicted, the Eni managers could face up to six years in jail. Contacted by the Guardian, Eni said it was “waiting for the decision of the judge” and that it trusted the work of its managers in Gela.

Eni said there was no evidence that malformations were caused by emissions from its refinery rather than other factors such as smog or other substances present in the air.
In 2007, Fontanella asked the local court to investigate the correlation between the high rate of birth defects and pollution from the refinery, which residents nicknamed “the Monster of Gela”.

The court accepted his proposal in 2012 and commissioned environmentalists, doctors and geneticists to study the links.

The experts’ study concluded in 2015 that the sea around Gela was so polluted that it was “technically incorrect to talk about the toxic contamination of the water”.

“The toxic contaminant should be less than, in this case, the water,” they wrote. “Gela seems to be the opposite: it is the water that is the contaminant of the toxic substance.”

The alleged victims include 20-year-old Kimberly Scudera, who has spina bifida – a severe condition where the spine and spinal cord do not develop properly in the womb – and uses a wheelchair.

The court-commissioned doctors said of her condition: “The technical commission unanimously believes that the possibility that Kimberly Scudera’s spina bifida has been caused by the presence of chemicals in the environment (air, water, nutrition), produced by the industrial plant, is entirely concrete.”

Scudera is an Italian archery champion training to participate in the 2020 Paralympics. Her family has sought – but not received – payment from Eni for her care. She lives in an apartment on the second floor of the family home. Her family does not have the money to build a lift. To take her to training each day, Scudera’s mother carries her down the stairs on her back.

Eni said the study “hasn’t reached appreciable results’’ and “in this context, no reparations is being considered”.

Eni reached the same conclusion about Nicolò Pace, 15, who was born with a severe cleft palate. In order to pay for Nicolò’s care, his father, Antonio, has accumulated heavy debts.

“This is crazy,” Antonio said. “If we’ll ever get a reparation cheque, the money will all go to my son, for his future, so that he can begin doing what he wants in life, after years of suffering.”

In March, Fontanella asked the local court to seize the farmland around the refinery, to prevent people from eating products linked to the birth defects. Fontanella also asked for €20m (£18m) in compensation for 100 of the affected families.

The court has not yet commented on these requests.

Gela’s chief prosecutor, Fernando Asaro, who has led the investigation alongside the local branch of the Italian coastguard, said: “On the one hand, the petrochemical plant has provided work for a large number of families here. On the other, its presence has heavily polluted the air, water and subsoil of the area, causing tumours and genetic malformations among the population. It was our duty, especially with regard to these people, to intervene.”

As early as 1998, the Italian state – which holds a stake in Eni – recognised the potential link between the refinery and the town’s health problems. That year, the environment ministry included Gela on a list of highly contaminated areas. The government recommended that Eni carry out what it called remediation works – to decontaminate the area – with an estimated cost of €127m. The works were never completed.

Fontanella said the fight for justice was far from over. “I don’t feel like a lawyer in this trial. I feel more like a captain of a ship, sailing in a stormy sea. And I will fight those waves until the end, until my clients receive what Eni has taken away from them.”
Posted by Eni's Way at 9:01 AM