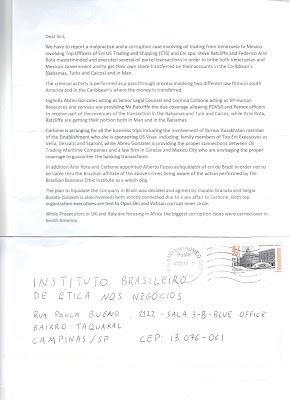 For the second time, the Brazilian Business Ethics Institute received an "anonymous complaint" involving Eni Americas: executives misconduct, corruption international and nonconformities with the Code of Ethics of the company. Unlike the first complaint, whose letter was sent from the United States, now the complaint was sent from Italy, headquarters of the Italian oil giant.

Can you tell me the reasons why an employee might not use Eni's "internal channels" preferring to report me: a "whistleblower" who fights for over 15 years to rescue and restore the name, the honor and the reputation that was unfairly depreciated by the denounced company itself?

Now I will send this complaint to US DOJ and SEC for the investigations against Eni.

a) Read a first complaint in PDF

b) Read the second report in PDF