Tell me who you walk with and I'll tell you who you are! 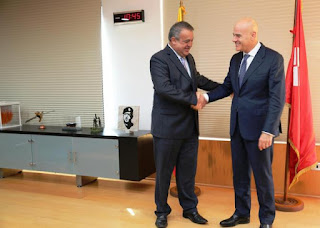 PDVSA, partner of the Italian giant Eni, is being investigated for corruption... Tell me who you walk with and I'll tell you who you are!

How do multiple enforcement authorities from different countries hold one of the largest petroleum producers in the world accountable for years of institutionalized corruption? Press reports on investigations of Venezuela’s state-owned oil company, Petroleos de Venezuela S.A. (“PDVSA”), suggest several answers. Authorities go after the company’s former leaders who reside outside of Venezuela. They focus on money laundering as well as bribery offenses. They proceed against the banks that assisted those leaders. They focus on other individuals connected to the bribery schemes. And they cooperate with one another. The PDVSA investigations appear to be an extraordinary undertaking involving so far authorities from the United States, Andorra, Spain and Switzerland.
United States Efforts. According to the Wall Street Journal, the current U.S. Government investigations are aimed at establishing whether Venezuela’s leaders siphoned billions of dollars through PDVSA and at whether they also used PDVSA for “black-market currency schemes and laundering drug money.” In the United States, six individuals have already pleaded guilty.
The U.S. government is also reportedly looking into another Venezuelan energy company, Derwick Associates.
Other International Efforts. The U.S. charges that have been made public might be just the beginning. PDVSA schemes could unravel further. In particular, foreign governments appear to be intensifying their efforts too.
Andorran authorities are investigating suspicious transactions involving Venezuelan officials. They have arrested the CEO of Banca Privada d’Andorra (“BPA”) on money laundering charges said to be linked to PDVSA. Relatedly, BPA has been on the U.S. Government’s radar. On March 10, 2015, the U.S. Department of the Treasury Financial Crimes Enforcement Network (“FinCEN”) named BPA a Foreign Financial Institution of primary money laundering concern and issued a Notice of Proposed Rulemaking. This decision was based, in part, on the information concerning the BPA’s role in money laundering of funds in the sum of approximately $2 billion funneled from PDVSA. This decision was then dismissed by the FinCen on February 19, 2016, when the U.S. authorities found the bank’s remedial plan to be sufficient.
Spain’s law enforcement agencies have reportedly launched an investigation of alleged money laundering and corrupt activities involving at least three ex-deputy ministers of Venezuela, the ex-intelligence chief, an executive of PDVSA, and a businessman close to late President Chavez. According to the authorities, these officials are clients of the BPA’s Spanish affiliate.
The Swiss government has also agreed to provide U.S. authorities with information about PDVSA-related transactions. According to reports, the Swiss authorities have agreed to provide U.S. prosecutors records from at least 18 banks related to transactions between the banks and individuals and companies allegedly involved in PDSVA-related criminal conduct. The request for information from eight banks was reportedly received from the U.S. Department of Justice Fraud section, and information requests related to 18 banks was received from U.S. Attorney Preet Bharara. At the moment there is no indication that the requested information has been turned over to the U.S. investigators by the Swiss Government.
Where the Venezuelan Government Stands. In the midst of these investigations and prosecutions, the Venezuelan Government has consistently denied the allegations of widespread corruption. It has attributed the investigations to efforts to destabilize Venezuela, a country that is undergoing a serious economic and political crisis. Some believe that former, and even current, PDVSA officials, as well as related entities, might have incentives to seek cooperation with U.S. and other authorities. This is because it is not clear how much longer the current administration will be able to maintain authority in the country. A new administration might take a different approach to PDVSA, perhaps focusing on investigating prior wrongdoing itself. Officials might make the calculation that it is more beneficial to resolve prior misconduct promptly, before the situation grows worse.
Post authored by Matt Ellis, FCPAAméricas Founder & Editor