After the investors' pressure Eni says something else 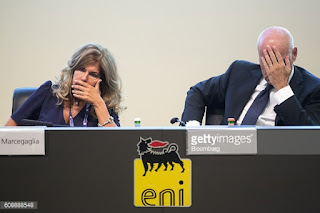 Board has full confidence in governance expert’s “competence, integrity and innocence”

Eni has said it believes corporate governance expert Karina Litvack is innocent of charges brought against her by authorities in Syracuse, which led to Litvack’s suspension from one of the Italian oil and gas company’s board committees.

Litvack, the former Head of Governance and Sustainable Investment at F&C Asset Management who joined the board of Eni in 2014, was removed from the company’s board-level Control and Risk Committee earlier this year, though she remains on the board.

At Eni’s investor presentation on its sustainable energy strategy in Paris today, an unidentified investor asked the firm to give its views on “concerns about the governance of the board, and the respect of minority shareholders” following the removal of Litvack – who the investor described as “our elected representative on the board”.

As RI reported yesterday, corporate governance activists have raised concerns about the issue.

Eni Chairwoman Emma Marcegaglia took to the podium to give the company’s views on the situation, explaining that in July the board was notified of the judicial investigation which involved “alleged wrongdoing and offences against Eni and its CEO” by Litvack and others.

“As we always do in these situations, the board took legal advice,” she said adding that they were informed “that when there is a risk of prejudicial circumstances, the board could be liable for negligence if it doesn’t take action”.

In this situation, the board felt in a certain way that it had no alternative but to remove, temporarily, Karina from the risk and control committee,” Marcegaglia said, clarifying that Litvack remained a member of the compensation committee and the sustainability and strategic committee. “She is also still a full member of the board, and works a lot with us.”

“The board has full confidence in Karina’s competence, integrity and innocence,” Marcegaglia said. “And as soon as the charges are dropped, it’s my firm intention to propose to the board to re-nominate her in the risk and control committee.”

The chairwoman also told the audience that Eni was financing the legal costs of the process, which she believed would be covered by insurance, “but if there is any problem with that then the company will pay”.

Marcegaglia, who as president of business lobby group BusinessEurope, has in the past clashed with investors over climate disclosure.

“We will work together in the spirit of the best mutual trust and collaboration,” Marcegaglia concluded today. “We consider her work very valuable.”

a) The red light is lit for the investors of Eni

c) Luigi Zingales investigated in the conspiracy at Eni