The beginning of the end of Eni! 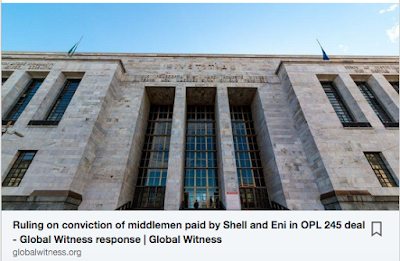 Today, Judge Giusy Barbara ruled on the conviction of two middlemen in the scandal-ridden OPL 245 oil field deal, in which she stated: "The management of oil companies Eni (and Shell) were fully aware of the fact that part of the $1.092 billion paid would have been used to compensate Nigerian public officials who had a role in this matter and who were circling their prey like hungry sharks,” - as reported by Reuters.

"This ruling will send shivers down the spines of the oil industry - and will surely alarm Shell and Eni employees and shareholders who have been repeatedly told that there was nothing amiss with the OPL 245 deal."

The Milan judge made the comment in her written reasons for the September conviction of Nigerian Emeka Obi and Italian Gianluca Di Nardo, both middlemen in the OPL 245 deal, for corruption. The pair were sentenced to four year jail terms.

Read more in this link.

Another lawsuit! And now Eni? 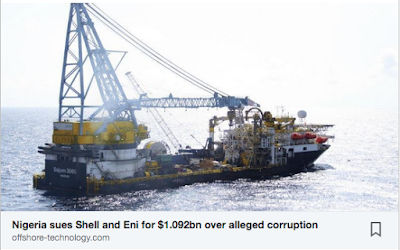 Nigeria has filed a $1.092bn legal claim in the UK High Court against oil giants hashtag#Eni (and Shell), over alleged fraudulent practices and cases of corruption, and subsequent divergence of billions of dollars in potential revenue from the Nigerian people.
And now Eni? What does the Board of the company have to say?
Posted by Eni's Way at 8:29 AM No comments: