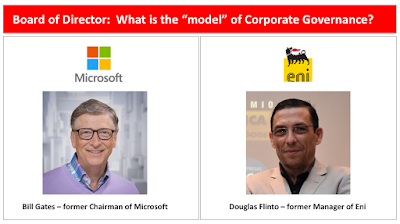 This month, the global media is talking about the "investigation" carried out by Microsoft's Board on the love affair of the company founder Mr. Bill Gates, which occurred in the year "2000".

The Board of the Italian oil giant has, in these 20 long years, a totally different posture from the position of the Microsoft’s Board in relation to its former Chairman, Mr. Gates.

My "ethical fight" with Eni completes two decades in August 2021. In all these years, four different Chairmans and three different CEOs have been contacted by me. But, Eni’s Board did not analyze my case despite the evidences and the proofs presented by me.

In November 2020, Eni requested a "proposal for amicable settlement", confirmed by the Italian Ambassador in Brazil. But, the company was silent ... It did not say "yes" and it did not make a "counterproposal" as determined by "good practices" in commercial or judicial relations. It did not even answered the questions asked by an #Eni "critical shareholder" in May 2021! Eni did the same thing at the AGM 2020.

Some of the questions won't stay silent: What is the purpose of Eni's Code of Ethics? How are the Stakeholders' complaints investigated? Why doesn't the Board of Eni fulfill one of its main roles: to be a "Guardian of Ethics"?