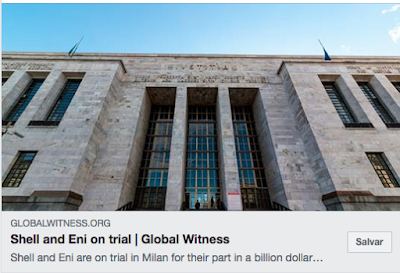 Oil giants Eni (and Shell) are on trial in Milan for their part in a bribery scheme that robbed the Nigerian people of $1.1billion.

The case brought by the Milan Public Prosecutor alleges that $520 million from the deal was converted into cash and intended to be paid to then Nigerian President Goodluck Jonathan and other Nigerian government officials. The prosecutors further allege that money was also channelled to Eni and Shell executives, with $50 million in cash delivered to the home of Eni’s then head of African Operations Roberto Casula.

On October 17th 2018, Global Witness co-founder, Simon Taylor, gave evidence in the trial, having triggered the investigation which led to the trial by submitting a criminal complaint by Global Witness, Re:Common, and The Corner House in 2013.

For the full story of Shell, Eni, the convicted money launderer, and Nigeria’s stolen assets please visit this LINK.